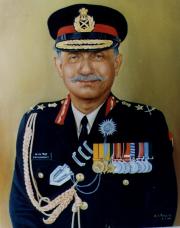 Our member, General (Retd) Shankar Roychowdhury, gives us the lowdown on the preparation of this special day.

Republic Day is momentous occasion in the life of the nation. On 26 January every year, the nation and the world is treated to one of the “Greatest Shows on Earth” as India’s Republic Day Parade rumbles majestically down Rajpath, in the capital, New Delhi. Leading the parade are the Armed Forces, the pride of the nation.

The finished product which dazzles the spectators is the result of many hours of hard work and intricate behind the scenes coordination by the Armed Forces which commences several months ahead of the event. As the saying goes, practice makes perfect. The troops, tanks, artillery guns and other equipment as also the series of bands which pass in review before the spectators have to be moved to New Delhi in early January and concentrated in the Republic Day Camp established in the vicinity of the Army Parade ground in New Delhi Cantonment. The rehearsals commence on the Parade Ground in early January. Marching, driving, and saluting in parade formation by horsed cavalry, Army Dog Squads, tanks, artillery, infantry as well as flight rehearsals by helicopters of the Army Aviation Corps are rehearsed almost without a break every day, until due results are achieved. It is hard and precise work, but the troops carry it out willingly and with enthusiasm, often even after night has fallen. These rehearsals are of course not seen by the public, and are put on display for the first time at the Army Day Parade on 15th January every year held on the Army Parade Ground in the cantonment. The Army Day parade is the Army’s own dress rehearsal for its participation in the Republic Day Parade and is commanded by the General Officer Commanding Delhi Area. The Chief of Army Staff takes the salute at the Army Day parade, which is attended by large numbers of veterans, school children, as also service families, not all of whom will get a chance to attend the main Republic Day Parade at Raj Path. The Army Day parade concludes with a display not seen during the main Republic Day Parade – a demonstration of an attack by an integrated combat team of armour and mechanised infantry, supported by artillery. It is display as realistic as possible within the area available and is greeted enthusiastically by the spectators.

Army Day over, the Army contingents are concentrated at camps established near the Republic Day parade venue on Rajpath, where rehearsals continue, this time with the total parade contingents from the three services, the paramilitary forces, as well as other participants from schools and colleges, together with colourful cultural floats and contingents of folk dancers, as well as fly past by the Air Force. The weather is a very important factor here, and many anxious glances are cast sky wards hoping the Air Force flypast can take place as scheduled. Finally, the big day, with all its ceremony, shown to the country and the world, and the crowds stream home. Another Republic Day over and the Republic is a day older.