A Voyage on a Modern-day Noah’s Ark

Our member, Ms Flower Silliman, shares a story about one of her exciting voyages on a cargo ship from Kolkata (then Calcutta) to the UK with her husband, mother and three children around 50 years ago, with Mousumi Gupta.

“My husband was attached to a foreign currency exchange and import-export business, which entailed travel across the world,” said Ms Silliman. “So, I consider myself lucky to have embarked on some wonderful journeys with my family and to have gathered unique travel experiences.”

The Silliman family embarked on a particular voyage on a cargo ship, which was carrying tea and jute from Calcutta to the UK. “Ahead of the journey, the captain of the ship told me that he had arranged for a floating zoo for our kids!”

“At first, I couldn’t understand what that meant and took it as a joke.”

Then, Ms Silliman, describing her pleasant shock, said: “Soon after we boarded the ship, which only had the captain’s cabin and two guest cabins on the deck, we discovered that the captain wasn’t quite joking. There were 11 elephant cubs, around four huge cages of birds of different exotic species and few monkeys welcoming us. It was almost like Noah’s ark!”

“The children were thrilled to be sailing on a ship full of animals as their co-passengers in the midst of an ocean. The animals were travelling from Calcutta to a zoo in the UK. The kids used to help the animals bathe on the deck and play with them the whole day except when their grandmother forced them to sit for studies,” recollected Ms Silliman.

“The ship harboured once at Madras (now Chennai) and then at Cochin (now Kochi) to load all the food supplies before heading for Suez Canal. Everyday my son, who was very fond of banana and milk, managed to steal one or two from bunches of bananas kept for the elephant cubs. To stop him, the captain would jokingly say: ‘Those bananas are for the elephants. If you eat all of those, I will offer you to the cubs for meal’,” said Ms Silliman from her sharp memory.

“When the ship crossed Suez Canal and entered Sudan, a herd of cows joined the floating zoo. My son was extremely happy that he could have fresh milk too! The ship sailed through Alexandria and reached the UK after five weeks. The voyage was so fun that we felt as time had flown past,” she said.

“For the children, it was school away from school, as they learnt several things beyond bookish knowledge during their voyage,” concluded Ms Silliman. 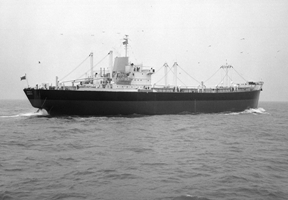