From A Traveller's Diary - Salem

Our member, Mr K. K. Pradhan, who served with Customs Intelligence, is a widely-travelled man, dealing with a host of sensitive cases. He found his Salem sojourn in Tamil Nadu, where he was posted for a few months, fascinating. Salem is both a geologist’s paradise and pretty as a picture!

Surrounded by hills with even the landscape dotted with hillocks, it also has a range of industries, from the mighty steel plant to handloom and cottage industries. Industry flourished because of the iron-ore locally available. It supported steel-making and served other medium and large industries as well.

The crafts flourished because of the sheer creativity of the people. Add to this Salem’s work ethics that transformed the small town into a major industrial city. Its most remarkable feat for Mr Pradhan was that Salem is a city free of destitution.

People worked in shifts, opening little shops in the morning and then going to work in the fields. Salem produces raw material for agro-based industry. It is the only round-the-year centre for sugar production with people growing their own sugar cane. Agriculture is a primary source of income and farmers participated in digging canals that brought water from the Mettur Dam, more than 50 kilometres from the city to irrigate their farmlands.

“I was surprised to see the vegetable market starting as early as between 3.30 and 4 am and getting wrapped up by 7.30 sharp, leaving the place clean. At 7 am, there would be an announcement of closure by the municipal authority and those who dilly dallied over closing shops would find a van with two long sticks, moving in to break the temporary shops. After 7.30 am no one would think that there was a bustling bazaar there”.

Salem is as dynamic as it is steeped in tradition. Traditional values reveal themselves in the lifestyles of the locals. Women wear gold chains and ornaments for which Salem is famous. “You will find thick gold chains and ornaments worn by almost everyone including the vegetable vendors”. The city is also the largest producer of traditional silver anklets that women cannot do without. Even the young generation is tradition bound, early to rise and early to bed.

For the visitor though, the city beguiles; not just with its bustling streets but equally with its natural serenity. 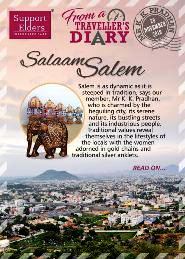