Our member, Ms Rupali Sarkar, shares fond memories of her visit to the Andaman and Nicobar Islands almost 20 years ago, with Mousumi Gupta.

“We went to Andaman & Nicobar around 15 to 20 years back by plane. But memories about the trip are still fresh in my mind as if just yesterday,” says Ms Sarkar. “The serene island, with its natural beauty, makes it a sought-after destination for tourists though the place didn’t have a very pleasant past because of its reputation as ‘Kaala Pani’!”

Detailing her trip, she says: “Among the places we liked the most was the Havelock Islands, the sea trip to watch the coral reefs and surprisingly the Cellular Jail-a nightmare for freedom fighters in those days.”

“Havelock and Neil & Ross islands are all travellers’ paradise. Havelock, with its sublime beaches and tranquil water, is the main tourist attraction. Added to its beauty is the glass bottom boat cruise for watching marine life and corals. Though we were not in an age of scuba diving, we could enjoy seeing the under-water creatures sitting from inside the boat,” reminisces Ms Sarkar.

Cellular Jail derived its name from the individual cells built to keep prisoners in solitary confinement. Also, popularly known as ‘Kaala Pani’, it was built between 1896 and 1908, and was home to hundreds of freedom fighters. The most dreaded colonial prison is situated in the remote archipelago and was used by the British Indian government to exile Indian political prisoners.

Giving a vivid lowdown on the jail visit, Ms Sarkar says: “The cellular jail in a remote archipelago gave us mixed feelings of pride and shame. It is a pilgrimage for all freedom-loving people. The jail museum drew our memories back to those years of struggle. The photographs of freedom fighters, the cells where they were confined, an exhibition gallery, which showcases the struggle and sacrifices of the freedom fighters-all are fresh in my mind. An eternal flame of freedom, Swatantrya Jyot, is kept lit in the vicinity of the Cellular Jail in memory of all freedom fighters and martyrs.”

“The jail is now open to public viewing as a National Memorial, and its museum gives one a glimpse of years of India’s struggle for freedom. The guide showed us the cells, where freedom fighters like Batukeshwar Dutt and Veer Savarkar were held captive. The whole story of those days in and out of the Cellular Jail was shown through a light-and-sound show in the evening,” recalls Ms Sarkar.

On a pleasant note, she says: “We also went on a tour to visit the areas inhabited by the Jarawas but we were given strict instructions as to not to disturb them and not to click their photos. We were very surprised to see them curiously watching us roaming.” 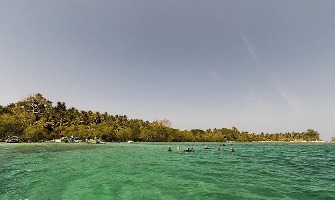