Our member, Dr Nrityendra Nath Saha Chowdhury, and his wife, Ms Madhuri Saha Chowdhury, were smitten by Bhutan, the tiny magical nation shrouded in mystery, a few years ago. They shared their vivid memories with Mousumi Gupta.

“Bhutan, the last remaining Buddhist kingdom in the lap of the mighty Himalayas, ornate with its temples and dzongs (distinctive type of fortress architecture found mainly in Bhutan and Tibetan areas of China) always attracts tourists from different parts of the world,” said Dr Saha Chowdhury.

“We, at 80+ age and our relatives, all senior citizens planned to visit Bhutan with a cook who served us home-cooked food. Keeping the age in mind we avoided local food, but my wife says that one could understand the country better if one tastes the food,” he recalled.

Describing the journey part, he said: “We went by train to Alipurduar in north Bengal. From there by road to Phuentsholing, the time varies due to the curvature of the road. It is next to the Indian town of Jaigaon where our passports and travel permits were checked.”

“The Bhutan Gate is one of the most photographed attractions followed by Karbandi monastery for its marvellous architecture. The municipal cleanliness and orderly planning is worth mentioning throughout Bhutan,” said the member.

“From Phuentsholing, we went to the capital city, Thimphu the next day. The juxtaposition of ancient tradition and modernity with the new commercial euphoria makes this city a wonderful destination. The gigantic Buddha Dordenma, Tashichho Dzong are the worth-watching places,” says Dr Saha Chowdhury.

“Our next destination was Punakha Dzong, the winter capital of Bhutan which is located at the confluence of the Pho Chhu and Mo Chhu (Chhu as they locally call the rivers) in the Punakha–Wangdue valley. The only access to the dzong is across the beautiful Bazam bridge that connects it with the mainland,” he fondly reminisced.

“The intricate paintings and the architecture of the six-storeyed wooden fortress, the sacred relics of the southern Drukpa Lineage and Ngawang Namgyal is enthralling. My wife climbed the serpentine wooden stairs to watch the sacred relics, while we stayed at the base enjoying the mesmerising artefact flanked by thick jacaranda trees in the surrounding of rivers and scenic mountains. Our lunch in the backyard of the palace with permission made it extra-special,” said a besotted Dr Saha Chowdhury.

“The next day, we proceeded towards Paro, a picturesque valley covered with oak and rhododendrons and crystalline confluence of rivers Paro Chhu and Wang Chhu. The country’s only international airport Paro contains one of Bhutan’s most iconic landmark, Taktsang Monastery, the Tiger’s Nest that perches proudly on the mountain and Rinpung Dzong with its classic Bhutanese architecture. From Paro, we were back to Alipurduar.”

The conventional-style houses, the awe-inspiring temples and fascinating monasteries dating as far back as the 14th century, along with the well-informed and well-educated citizens, is a perfect example of how the customary Buddhist culture carefully embraces global developments.

“Bhutan, the last pristine pockets in the entire Himalaya with the traditionally attired, simple and law-abiding people makes it a no ordinary tourist destination,” he said. 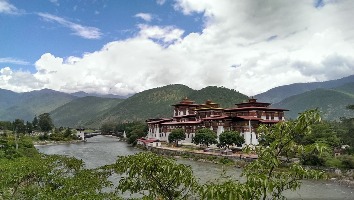