Post retirement is when many of our members have travelled over the world. So did our member, Cdr A. K. Bandopadhyay, who served even after he had retired from the Indian Navy on December 31, 1990 when he joined the Kolkata Port Trust. From where he retired on May 31, 2003. Now it was time to discover the world.

Post retirement, we started to undertake international group tours organized by Thomas Cook almost every year. The last tour that we took was a combined tour of England, Scotland and Wales, followed by Irish Discovery between June 11 and July 2, 2019. This time we booked ourselves with Cosmos, as the places that we wanted to see were not on the Thomas Cook itinerary. The 11-day tour, London to London, covered England, Scotland and Wales but the Oxford visit is the one I shall restrict myself to.

The memorable walking/sightseeing tour of Oxford showed us the colleges where the elite from Britain and many other countries receive its outstanding education. The University of Oxford has 38 colleges and six Permanent Private Halls (PPHs) of religious foundation.

The colleges are not only houses of residence but also have the onerous responsibility of teaching undergraduate students. A typical college consists of a hall for dining, a library, a college bar, senior middle (post graduate) and junior common rooms, rooms for 200- 400 undergraduates as well as lodging for the head of college and other dons. I cannot possibly show pictures and describe all 38 colleges but I am tempted to talk about at least two institutions that captured my attention the most: the Bodleian Library and the Hertford College.

Known to generations of Oxford students as “the Bod”, the Bodleian Library was named after its original patron, Sir Thomas Bodley, who established the library in 1602. In doing so, he took upon himself the refurbishment of a former library that had fallen into disuse, the Duke Humphrey’s Library above the Divinity School. That room was initially built in the late 1400s, to hold a college collection of texts donated to Oxford University by Humphrey, the Duke of Gloucester in the 1430s.

The Hertford College is a constituent college of the University of Oxford. There is a skyway joining two parts of Hertford College over New College Lane, popularly known as ‘the Bridge of Sighs’. It is one of the city’s most famous and most photographed sights. It was completed in 1914 and is located on Cattle Street in the centre of Oxford, directly opposite the main gate of Bodleian Library. This building reminds me of another famous building of the same name ‘the Bridge of Sighs’ in Venice. This Bridge of Sighs was built to connect the old prison with the new prison that was built across the Venice canal in the late 16 th  century. 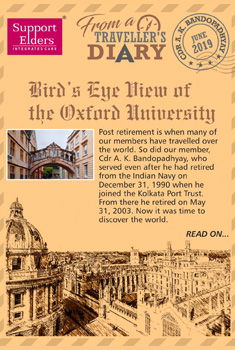