The Amazon Rainforest is the world’s richest biological reservoir. The region plays host to several million species of insects, plants, birds and other forms of life. Many are yet to be recorded. It was to this world of tarantulas, piranhas, alligators, sloth bears, macaws and many more that Ms Chatterjee and a group of friends went.

The group flew from Sao Paulo to Buenos Aires and then to Manaus in Brazil in a small plane, before embarking on a boat journey along the mighty Amazon. The sheer thrill of the journey, the fascinating sights of the locals fishing on their canoes, passing through the forest-covered banks of the river are imprinted in her mind.

The group embarked on a ship that offered double-roomed cabins. “We were briefed on how we would have to get ashore at regular intervals for rainforest walks with our guide, who was a naturalist.” Just after sunset one day, the group got on to a smaller boat for alligator-watching in pitch darkness. The forest was dense on both sides of the river, making the journey both fearful and  fascinating.

Even more surreal  were the bright, shiny eyes of the alligator and what the guide did with these creatures. In a flash he caught a baby alligator from the congregation, bringing it to the boat for a photo session. That done, he threw it back to where he had picked it up from. That was enough excitement for the night and the rest of the journey on the ship was mesmerising.

They were in midstream, in a pristine location with a sky full of stars and unusual calls and sounds of the night from the ship’s deck. “It was breathtaking to gaze at the sky and watch the bright twinkling stars. The area was pollution-free and we sat on the deck dreamily”.

The morrow had new excitement in store. The group was taken on a trek to a Red Indian village. They first took a small boat and then walked on foot through the dense forest, with the guide literally cutting the branches to make a pathway.

“Suddenly someone in our group screamed and there was a cut on his shoulder. He was bleeding profusely. We were horror-struck!”

The guide did not bat an eyelid. He "just cut a bark from a tree and applied the sticky gel on the wound. The bleeding stopped almost immediately.” One member of the party, however, began to panic and pleaded with the guide to return to the boat. She was somehow persuaded to come along to the village.

“The Red Indian homes were made of timber and mud. The house the group visited had a big glass jar in the verandah with a big snake coiled inside. Was it the household’s lunch?" we wondered. "The villagers were very friendly and had painted their faces with red paint made from seeds. This was a century-old tradition”. The wonderful experience came to an end with a memorable group photograph.

Ms Chatterjee’s cabin mate was a bit too tall for the bunk bed. So they were shifted to a flotel; a floating hotel anchored nearby. Surprised to see a swimming pool in the floatel using mineral water, they realized that the regular water was absolutely black. The hot,
humid weather decomposed the organic matter very quickly and it was absorbed by tree roots and fungi. That rendered the water unfit for use.

Next on the agenda was “Piranha watching”. This proved to be exciting because these misunderstood fish made for a delicious meal. “We had the one that we fished”. The guide attached a large chunk of meat to the hardy fishing rods and asked the visitors to make a noise in the water by moving the rod up and down. The smell of blood attracted the fish that came in groups. Capturing the fish, frying it and having it in that wild environment was quite an experience.

En route, the group encountered leaping movements of monkeys, sharp-clawed woodpeckers, sloth bears in search of food even as they sought to escape from predators. The sloth bear rarely needs to come down to the ground. So the guide suddenly jumped off the boat and caught a baby sloth and brought it for the guests to examine. The lazy animal continued to sleep without moving! After the group was satisfied with a photography session, the guide simply hung the sloth back on the branch of a tree.

“One popular activity that we did not venture into was anaconda- spotting”, which is best done in the dry season when the water level is low and the snake has fewer places to hide. Also, the best view is from under water, while snorkeling, because the anaconda swim past humans without realizing that it has let go of a possible prey.

The group did not mind missing the anaconda because the alligators and snakes and other animals had made for an enriching experience.

Once back home, television channels interviewed her and she shared her encounters with a world unexplored by many. 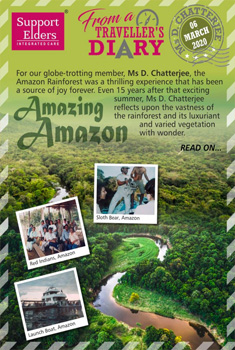