A puja of her own - Ms S. Sinha | Support Elders 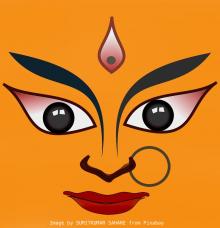 Marriage took our member, Ms S. Sinha, to Bhilai in the mid-sixties. An industrial township, it was so different from Kolkata. Even more different was the Durga Puja celebration there.

The pandemic has stirred up nostalgic memories of days that were. Durga puja has come and gone without much of the frenetic spirit of celebration. For Ms Sinha this year’s restrained experience evoked rather wonderful and joyous memories of her puja days at Bhilai some four decades ago. Bhilai pandals and idols stuck to tradition and the celebrations were homely with every Bengali household participating.

From organizing finance to organizing the fun and cultural events, everything was done by the families themselves. Some went from home to home, bill books in hand, collecting subscription, a job that was later handed over to the women; others got into the act of organising the cultural events, hosting regular rehearsals for plays and other performances that would be put up every day; yet others got busy supervising the pandal constructions and talking to the murti karigars.

Almost every block had its puja so the options were varied and there was much to look forward to between saptami and dashami. The days would start quite early with everyone taking a shower and turning up at the pandal in a new dress. Some would help the priest with the rather elaborate arrangements, others would cut fruits, yet others wove garlands.

Once the arrangements were done, it was time for Anjali at the auspicious hour, which the children eagerly waited for. The prashad, in packets, would be distributed after the Anjali and every child looked forward to the packet. The joy of such innocence is still fresh in Ms Sinha’s mind. Then there was the ‘dhak’ that the Kalibari was famous for and devotees would go off to the Kalibari to enjoy the dhakis.

Ms Sinha’s special responsibility was to get the actors ready for the cultural events. Every one had to be made up for different cultural programmes in different blocks and Ms Sinha would happily take on the job of the make-up artist, patiently getting everyone ready till well into the evening.

The shows would take place every evening with participating children adding to the general merriment. Even the non-Bengali members of the community got into the festive spirit and demanded front row seats to the programmes.

Back in Kolkata, it has been different, pandal-hopping and appreciating the remarkable creativity on display at every pandal. Yet Ms Sinha does “miss the traditional pujo of Bhilai”. That was her “own household pujo.”