The night India won her independence 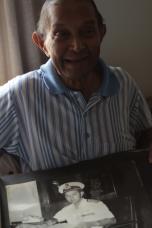 I was just a 11-year-old boy then but still vividly remember that night of madness and all the euphoria that surrounded it.

Our house was located next to the wall joining Red Fort and Kashmiri Gate, on the banks of the Yamuna river. So, we were actually a part of Red Fort. So, it was barely a mile or a mile and a half away. I was quite aware of what was happening and knew about India getting her freedom. I knew what it meant. I had seen quite a few older neighbours being a part of the ‘Quit India Movement’ and other freedom movements.

On the night of 14th August 1947, I knew the Indian flag was going to be hoisted. Sadly, I was not allowed to go because there was no one to take me. My father was already there. He was one of the engineers with All India Radio and was part of the broadcasting team. At 11 p.m. that night, I ran to the terrace of my house, thinking and hoping that I would be able to hear the speech or see something. I could see the lights and fireworks. It was most beautiful. I could hear that buzz of thousands of people shouting. I was shouting and jumping with excitement. Then, suddenly I heard a loud rumbling—thousands and thousands of people were celebrating as the Indian Flag was hoisted. The euphoria was indescribable. I can never forget that feeling. It was like a thunder rolling over our head. The sky over Red Fort was lit up with flowers. There was complete happiness. We were so thrilled that we would no longer be treated like slaves. I remember seeing a sign at a park that read ‘Indians & dogs not allowed’. These kinds of things break your self-confidence. It was sad that we were 2nd class citizens in our own country.

The next day, I rushed off early to see the Indian Flag. Until that day, I sometimes walked down to school from my house when I missed the bus. From that day onwards, I walked down to school every day, without fail, just to see the flag. My friends and I would stop to watch the flag for a few minutes, filled with awe and amazement, before we walked off to school. It was such a wonderful feeling.