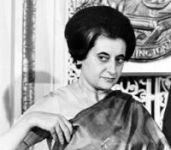 Eminent director and our member, Mr Shyamal Sengupta, narrates an amusing episode during his stint as an interior decorator, to Mousumi Gupta.

Years ago, Mr Sengupta got the opportunity of a lifetime to decorate then Prime Minister Mrs Indira Gandhi’s room in Delhi.

He obviously felt honoured and humbled as he carried out the interior decoration whole-heartedly. It was highly appreciated by Mrs Gandhi. He came back satisfied to Kolkata, then Calcutta, after completing his assignment.

“However, soon after I landed in Calcutta, I got a telephone call from Mrs Gandhi’s secretary saying that a key element was missing in the décor. To my utter surprise, I was then told that I had missed out arranging for a mosquito net in the PM’s room,” said Mr Sengupta.

“I actually didn’t know that I was supposed to arrange for a mosquito net. So what followed next was the specification—it had to be cotton, pink in colour and that too must be complemented with pink frills and delivered to her residence the next day. How could I  ignore the Prime Minister’s request!?” reminisced Mr Sengupta.

Mr Sengupta directly went to a popular mosquito net market in south Kolkata’s Chetla Haat. After looking around in several shops, he arrived at the conclusion that mosquito nets of various categories and specifications were available but all in white colour. “But the PM’s choice was pink! So, I asked one of the shop owners to buy Ranjak soap (used to dye clothes in those days) and colour the white mosquito net into pink,” said Mr Sengupta.

“The shopkeeper agreed, but nature played spoilsport. It was monsoon. And it kept raining intermittently. So, the big question was how to dry the mosquito net overnight,” recalled Mr Sengupta.

He then asked the shop owner to arrange for six big chulhas (portable clay ovens) to help dry up the mosquito net. The whole night, the net was hung up after dyeing in the heat generated by the burning clay ovens.

The precious pink mosquito net was parceled by a flight to Delhi the next morning before it could be handed over to the staff of its rightful owner.

“The hullabaloo over the simple pink mosquito net will forever be etched in my mind,” said a smiling Mr Sengupta.