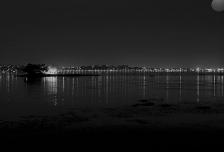 Our member Mr. Ravinder Kumar Puri was associated with the much-known Union Carbide India Limited and he travelled through out the country for his posting. He shared some of his beautiful memories of Bhopal prior to the tragedy.

Mr. Puri was posted in Bhopal for 3/4 years during late 70s. The quite sleepy town with people of laid-back attitude, scattered hillocks, river Betwa, two skyline silver coloured lakes everything came alive in his mind while describing. Once a princely state and suzerainty of the Nizam of Hyderabad, people had their inborn “princely” attitude! “We spend a wonderful time there with a stunning garden full of roses, a big bunglow and some beautiful people.” The Union Carbide plant the 2nd in the world after the US plant, completed in front of his eyes. Mr. Puri’s job was to depute people for the factory. “We had to constantly tell and remind staff there that a small amount of the chemical can destroy Bhopal and if the whole chamber burst it can destroy the whole of Madhya Pradesh, so you have to work really cautiously.” But that will turn into reality, he might have never dreamt of. He used to visit the plant every now and then even after he was transferred to Mumbai and eventually to Kolkata and the tragedy happened in 1983. “The devastation is known to all, but we were deeply disturbed because many of our friends and colleagues got affected due to the tragedy.” The highly toxic substance made its way slowly with air around the small towns located near the plant. Though the cause of the disaster remains under debate, but finally it is a single drop of water that entered the gas chamber which caused the devastation.

“We have never been to Bhopal after the tragedy”- may be because of the fear that the air is still intoxicated or maybe they don’t want to see their loving workplace transformed into an abandoned place with a deserted look.