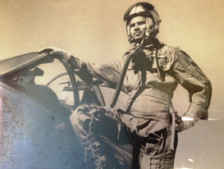 This Vijay Divas, Mousumi Gupta brings to us the experience of our member, Mrs Arundhuti Samanta, wife of Sqr Ldr AB Samanta, who embraced martyrdom during the 1971 Bangladesh Liberation War, being felicitated by Bangladesh Prime Minister Sheikh Hasina.

It was just another March day when Mrs Arundhuti Samanta received a call from an Air Force officer from Barrackpore, who expressed her wish to meet Mrs Samanta, to which the latter readily agreed. Accompanied by two other officers, the lady officer came to meet Mrs Samanta at her residence. Mrs Samanta was deeply touched to know that Bangladesh Prime Minister Sheikh Hasina wanted to felicitate seven Indian war martyrs for their invaluable contribution and supreme sacrifice in the Bangladesh Liberation War and her husband, Sqr Ldr AB Samanta, was one of them. The programme was to be organised at the Manekshaw Centre in New Delhi on April 8th, 2017. Initially, Mrs Samanta was a bit hesitant because she had had her knee replacement surgery just a few months back. The Air Force officers, however, assured her that her comfort and safety was going to be their responsibility. They also said that one person could accompany her. Since her son is settled in the US, she promptly called her younger sister to request her to accompany her as she had to tell the officers the name of the person who would accompany her. She also shared the news with her daughter-in-law and son. Her son, who was moved and excited to hear about it, expressed his wished to come to India to attend the ceremony. She then called up the Barrackpore Air Force station for permission to allow two people to accompany her; they gladly granted her request.

Right from Kolkata airport, Mrs Samanta was very well looked after. She was ushered in by Air Force officers, who ensured that she was comfortably seated on the flight and assured her that Air Force officials would take over at Delhi airport. When Mrs Samanta landed in Delhi, Air Force officers welcomed her and took her to the Air Force guest house in New Delhi, where they were to stay. Her son, who had reached Delhi the night before, had also been escorted to the guest house. All the seven recipients of the award and their family members were then taken to the Manekshaw Centre for prior stage exercise for the programme.

On 8th April, the programme started after a light lunch at around 3.30 p.m. The dignitaries onstage included Bangladesh Prime Minister Sheikh Hasina, Indian Prime Minister Mr Narendra Modi, External affairs Minister Mrs Sushma Swaraj and Finance Minister Mr Arun Jaitley. It was truly a trip down the memory lane for Mrs Samanta and a precious experience for her son, who had lost his father at a very tender age. The moment, though undoubtedly the proudest for the family, was also filled with grief, especially when there was the announcement about Sqr Ldr AB Samanta – “An air force fighter pilot, who carried out a raid on Dhaka in Bangladesh before the enemy fire shot down his plane over Tejgaon in December 1971, while he was on a mission and made a supreme sacrifice for the country.”

Mrs Samanta, filled with pride at her husband’s bravery, insisted on walking to the stage but the Air Force officers didn’t want to take any risk, so she was wheeled to the stage. She was, however, allowed to walk on her own to receive the felicitation from the Bangladesh Prime Minister Sheikh Hasina.

The following day Mrs Samanta was again escorted back to Kolkata with full care and respect while her son went back to the US with this unforgettable memory, feeling undeniably proud of his father.

Forty-six years after the finest military victory, we salute these heroes, who far from home and loved ones, sacrificed their lives for the nation. The stories of their courage and passion are larger than life.