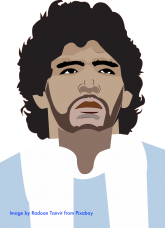 Our member, Ms S. Basu, gets a peep into human minds through the fan following for Maradona…

I have never been to the field to watch a real football game. My view of a match has been from my verandah, looking down on a bunch of kids wallowing in muddy puddles or under the scorching sun, running after the elusive ball. Yet the divide between East Bengal and Mohan Bagan is a real one and loyalties in the mock battle are as per one’s origin in the east or west ofBengal. For that one need not know the niceties and intricacies of the game but needs to be able to enjoy the taste of Hilsa or Chingri, when they are served.

I could never really comprehend the madness for the Football World Cup in which India never came near to participation till my son pointed out that the supremacy of the game was established by the fact that one could get passionately involved even when your team was not participating. “Can you think of such a possibility with cricket?” He asked. “You just adopt a country through the World Cup and follow its fortunes till the end”. I came to adopt Argentina and thereby Maradona.

Come to think of it, Maradona did not require the media or any branding to create his image. It was his game and skill alone that made him the unalloyed legend that he was. It was rather unobtrusively that he wound his way through the players and punched the ball into the top of the goal. I was mesmerised by the stodgy figure in the blue and white striped No. 10 jersey easing his way through the field. Off the field, he went about quite unaware of the fuss around him.

My grandson is now a fan of Messi and a host of other players that I cannot recognise. However, along with his craze for contemporary players, the legend of Maradona continues. There are some other names like Don Bradman, Mohammad Ali and Tiger Woods, who live on irrespective of the game they play or the country to which they belong. Maradona, like them, gave me a ring side view of what humans are capable of.