A Lady Who Get Lost On & Often | Support Elders

A Lady Who Get Lost On & Often 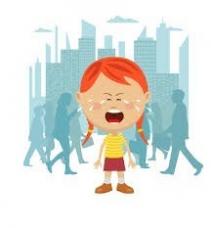 The only man in the world to be struck by lightning seven times was ex-park ranger Roy C. Sullivan. Kami Rita Sherpa. 22 times climbed Mount Everest. These are records from Guinness book. But here is someone, though not featured in Guinness book, our member Mrs. Ranju Hore, peculiarly, used to get lost over and over again.

“I was about 5/6 years old then when I was lost in Kolkata roads. I came to Kolkata to attend wedding of one of my relatives. When everyone was busy, I thought of going around and have a look at the city. At that age it was merely a fun going out somewhere without elders in the family. The fun turned out to a nightmare for me when I realized that I couldn’t find my way back to my uncle’s house. It was almost evening and I was feeling extremely tired and hungry. At last I saw two policemen. I approached them and narrated my sad saga. They offered me food and helped me to reach my uncle’s place.” That was only the beginning. She got lost several times in Gariahat market while shopping with her daughter. However by that time she became smart enough to take help from the local people to come back home. Now the latest one. Last year during September-October she went to visit one of her relative to Mississauga, a city neighboring Toronto with her elder brother. Both the siblings after few days of morning walk, thought that they were aware of the streets and parks. One evening when her brother asked her to join at a park, she was confident enough to reach that park without any hassle. She walked for about 15-20 minutes in almost freezing temperature in the dark roads. She could neither find the park nor the house where they were staying and she was lost again. After about half an hour trying to seek help, a kindhearted person helped her back home. “Fortunately, I could remember the address”, she giggled.

Well, that’s what life is all about. You make funny slipups in the past and enjoy the incidents in your safe and sound present, not knowing such mistakes may occur in the future also.