How the Katju name gave Jadavpur locality an identity 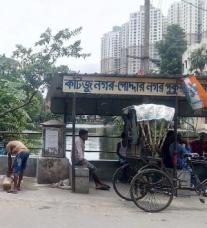 Our member, Mr Brajadish Das, shares the story behind his family’s flight from Bangladesh and settling in south Kolkata’s Katjunagar, with Mousumi Gupta.

Our member, Mr Brajadish Das, shares the story behind his family’s flight from Bangladesh and settling in south Kolkata’s Katjunagar, with Mousumi Gupta.

Kolkata (then Calcutta) was unprepared for the rush of refugees, who had crossed the newly drawn borders at the time of and after Independence. The journey for the people of then East Bengal or East Pakistan, now Bangladesh, was one-way because they never went back.

Like many others, I left Bangladesh when I was about 12 years old with my mother and siblings. My father was already in Kolkata working with Mackinnon Mackenzie & Co.

Living in the cramped ‘mess bari’ or rented rooms was entirely different from staying at our ‘desher bari’ (country home). But after the Partition, the educated middle-class flocked to Kolkata because they knew the city had the best chance to find their feet. Instead of waiting passively for government help, they began to rehabilitate themselves in and around Kolkata. The old boundaries of the city suburbs were pushed back to accommodate the wave of added population.

Things were not different for us also. Then we came to know about this locality which had an absentee landowner. The area was an army barrack during World War II, but they left post-war. The houses had thatched roofs made out of hogla leaves available in Jadavpur. Slowly, those were converted to concrete houses with basic amenities like water, electricity and wide roads.

Once the basic requirements were fulfilled, we started thinking about other important things like getting postal address. For an address, we needed a name. So, the entire locality unanimously decided to name it after then West Bengal Governor Dr Kailash Nath Katju.

The funny part of naming it as Katjunagar came from the thought that if any untoward thing happened, it would hit the headlines in the next day’s newspaper, which no one would dare do. Though nothing happened, that is how the area got its name. Now, whenever I stroll in the locality, the history of the area flashes in my mind.