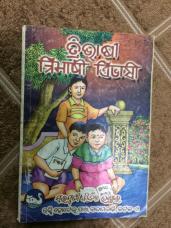 One of our members, Mr Dilip Kumar Dutt, has set an example of how spreading the light of knowledge cannot be bound by the barriers of age and language.

How far can a person’s conviction take him? Quite far!

Meet Dilip Kumar Dutt, a demure octogenarian and a retired engineer. Scratch the surface and out comes the gentleman’s resolve to teach and raise the two sons of the Odia caretaker of his residential house in Salt Lake, Kolkata.

The once-upon-a-time Bengal divisional cricket player, Mr Dutt, who has been playing guide and mentor to the two boys soon after their parents moved into the Dutt house more than a decade back. Not one to accept language as a barrier, Mr Dutt helped admit the two brothers into an Odia-medium school in Ultadanga for studies. And, the then septuagenarian started learning Odia himself. Right from learning the alphabets from the Odia primer and numericals to picking up the skills of spoken Odia, all Mr Dutt aimed was to guide the brothers ably in the right direction.

Mr Dutt initially insisted that the Odia couple put their children in a Bengali-medium school so that he could guide them easily. But they were more interested in the Odia school. Finally, Mr Dutt relented, thinking that the children would get educated unlike their parents.

But the brothers started struggling once promoted to higher classes. With almost no help from the school, they needed guidance in their studies. Mr Dutt thought of teaching mathematics, which would not trouble him with the language. But some of the sums needed explanation. With no other alternative, Mr Dutt went back to several bookstores in the hunt of Odia to Bengali/English dictionaries. He not only bought translation of mathematics but also ended up buying almost all the books where the stories were translated into Bengali. He studied the language in depth to explain the subjects properly to the boys.

When the elder boy passed Class X, Mr Dutt gathered information about an automobile course in the George Telegraph Training Institute and thought of paying its fees for the boy’s studies. But he decided to take up Plus Two in commerce in which Mr Dutt is guiding him now.

Mr Dutt’s sheer perseverance of showing the younger generation the light of knowledge by learning a totally unknown language in his silver years is inspirational, to say the least.