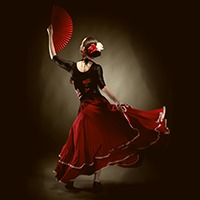 Our member Ms S. Chakrabarti is an avid traveller. She reminisces one of her
favourite dance form of Spain ‘Flamenco’ and shares a brief description of its origin.
Spain, formally the Kingdom of Spain is a Democratic Monarchy located in
the southwest side  covering approximately 85% of the total area of Europe. It has
been divided into 17 administrative departments all under the autonomous body of
Spain. These are also called historical zones or in their language ‘Comunidad
autonoma’.

Seville, Andalusian Spanish is the capital and largest city of the Spanish
autonomous community of Andalusia and the province of Seville. One of the most
important characteristics of Seville is Flamenco dance. Spain is famous for being the
Flamenco capital of the world.

The participants of this dance form sing and dance themselves . Flamenco singers
can easily convey their emotions to the audience through their drama and
passion. These songs are basically folk music and like many other country's folk
music, it has a passionate expression of their love and grief.