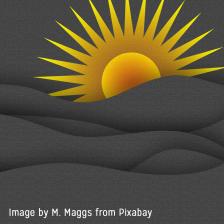 Ms R. Saha, our member, then resident of Kharagpur, had a problem with her thyroids for quite some time. She was advised to see an endocrinologist in Kolkata. The Kolkata doctor checked her up. He suspected malignancy and wanted her to go to Mumbai for further investigation. The grim diagnosis, given that she had two young children, saw her world crumbling before her, as she travelled back from Kolkata to Kharagpur.

It was then that she noticed her fellow passengers: a man with his teenaged son, who was asking rather childish questions: “Baba this is a cow, isn’t it? This is called paddy field, is it not? How beautiful these are!” She could not help ask the gentleman about his son. The answer turned her life around.

The boy, from Panskura, had lost his eyesight when he had chicken pox, when only three. The father and son were returning home after a successful Cornea transplant. The boy was excited to see the world in all its beauty. Ms Saha was a little embarrassed but also inspired. The teenager’s innocent questions gave her courage to fight against an undiagnosed disease and unplanned future. His fight and victory against darkness ending with his world all lit up seemed to help her overcome her own fears.

“After that journey, I was never afraid of visiting Mumbai for my treatment. The growth turned out to be benign and I am still fit and fine!”