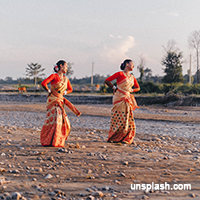 The Dikom Tea Estate, one of the oldest estates in Dibrugarh, Assam, was home for our member, Ms S. Laha, several years back. She was a Delhi girl but had travelled all over India with her father, who had a transferable job. These included Shantiniketan, where she studied and Puducherry too. The two ashrams had a defining influence on her life. Marriage to a planter took her to the tea estate and it meant considerable adjustment, getting used to life in the Dikom. The area finds mention in Assam's medieval era history, where local rulers of the Bodo-Kacharis discovered that the water of Sessa River flowing by was sweet and tasty. They named the place Dikom (Di or Doi means water). No wonder, every cup of Dikom tea has a sweet after-taste that is unique to this estate. Life here was an idyll compared to the madding crowd of urban India as Ms Laha settled down with her husband in their sprawling bungalow with its enormous compound. Dikom's undulating terrain, covered with lush green tea plantation, was the only view for miles.

The managers had a pampered life, with a retinue of well-trained help and a supply of fresh green vegetables. For recreation there was the Estate Club with its
swimming pools, tennis court and everything that one could possibly want. While this was luxurious living, there was a regimen around their lives and planters
were rather orthodox and disciplined in their ways.

Dikom was under British management in those days but it gradually changed hands to become an Indian-owned estate. The bonhomie continued though with parties, movies, get togethers, all sorts of entertainments and festive celebrations at the club. Everyone knew everyone else, which was totally different from the anonymity of city life. “The rolling plains of Assam with mist-shrouded hills, life on the tea gardens seemed completely different from the normal civilian lifestyle,” Ms Laha reminisces. Then there was the fascinating Bihu festival, which was celebrated in the club and at homes as well. This was the occasion when the locals visited the estate bungalows to dance to the lilting Bihu tunes, dressed in their festive finery. Tribal culture mingled with modern Assam with Bihu being celebrated throughout the state. The experience made for memories of a lifetime.