Child and the ‘Lake’ Mr A. Rakhshit | Support Elders

Child and the ‘Lake’ Mr A. Rakhshit 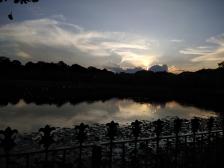 Around 1958, the city of Calcutta got the Dhakuria Lakes. This was a man-made water body, spread over 73 acres, beautifully dressed up with trees, plants and shrubs, giving the growing city a vast blue expanse. It was this idyll that our Member Mr A. Rakhshit remembers, not more than a five-minute walk from his ancestral home at Mudiali. He would undertake this walk with his father every morning, return home, have a bath, after a mustard oil massage that was routine for children then, before going off to school.

The lake was resplendent in its natural attire, unfettered by concrete boundaries, the surrounding parks rich with biodiversity. Trees apart, there were innumerable migratory birds and even little-known local birds that made for a birdwatcher’s delight. The quaint benches were inviting for adda enthusiasts and in the winter months the child would happily blow puffs of "cloud smoke".

The park was always open and couples spent hours doing what they do best. No one disturbed them because that was not considered “dignified” by the self-respecting. When it rained, the boys added to their merriment by jumping into the lake, beyond permitted hours for swimming. This was followed by a customary cuppa from the roadside stall that still sells tea. Only, today, the seller is the son of the original owner.

There was also the very pucca Calcutta Rowing Club that was reserved for the British and no Indian dared cross over the bamboo fencing. All that the boys did was to get a whiff of the food being cooked in the club when they walked by.

Even today Mr Rakhshit makes nostalgic visits to the park to recapture his childhood and meet his friends. Sadly, the childhood idyll is gone, the lake has lost its pristine charm but the attraction of old friends is hard to resist.