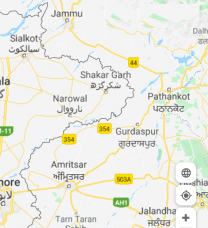 Life in the barracks can be fearful, especially when in the border areas, under constant threat of fusillade from enemy aircraft. Our member, Group Captain D. De, posted as ground engineer with the Indian Air Force during the 1971 Indo-Pak war, recounts some spine-chilling moments though nothing he said was quite as entertaining than the story of his little daughter treating the dropping bombs as fireworks.

Barely 40 kms from the Indo-Pak border, at Pathankot, is one of India’s most strategically located airbases. When the country is at war, it becomes especially critical for launching attacks. It was for our member, Group Captain De, posted as ground engineer with the Indian Air Force, during the 1971 war, to ensure that every fighter plane took off and landed safely. They were often engaged in deep raids into Pakistan territory and withstood retaliatory attacks during the wars of 1965 and 1971.

Group Captain De, an excellent raconteur, produced a spine-chilling account of his time there, the excitement of the trenches under regular bombardment post sundown writ large on his face even when recounting the tale several years later. On ideal days, the Indian Air Force could pre-empt such attacks, taking off early and positioning aircraft at a level higher than the Pakistan fighter jets. Sometimes, enemy planes entered by stealth and then the trench became the only option for officers, jawans and families.

The bombing over – there was minimal loss of lives during Group Captain De’s tenure – the hunt for unexploded bombs in the surrounding agricultural fields would commence. There was never an easy day. Pakistan had no fixed time for its raids. So, to the trenches it was, post sundown. Everything was pitch dark to avoid detection but the most important thing was building secure trenches.

It was for Group Captain De to successfully address the challenge of digging a 30ft by 15ft trench, about 8ft deep, in a record eight hours and covering it with dry leaves and plants for an effective camouflage. Only the aerials stayed outside the cover to catch signals of enemy aircraft and enable the launching of many a successful counter attack.

If this was not excitement enough, the Group Captain’s one-year old daughter chose to make matters interesting. This was before officers’ families were shifted to the safety of their hometowns. The Pakistan jets were showering bombs but, because of friction with airwaves, they started descending like firecrackers that are commonplace in India. There was the little Miss De clapping and shouting “Shadi hya”, welcoming the bombs as is they were bringing in a baraat.

It was left to a child to show the Pakistan Air Force its place!